The Time of the Sunset Prayer (Maghrib)
The time for the sunset prayer begins with the disappearance of the sun and lasts until the red twilight ends. 'Abdullah ibn Amr reported that the Prophet upon whom be peace, said "The time for sunset prayer is when the sun has disappeared and the twilight has not gone." [Related by Muslim].

Abu Sa'ib ibn Yazid related that the Messenger of Allah, upon whom be peace, said, "My nation will always be along the natural path as long as they pray the sunset prayer before the stars appear." [Related by Ahmad and at-Tabarani].

The Time of the Night Prayer ('Isha)
This prayer begins when the red twilight disappears and continues up to half of the night. Reported 'Aishah, “They used to pray the night prayer between the disappearance of the twilight and the final third of the night's beginning.” (Related by al-Bukhari.)

Abu Qatadah reported that the Messenger of Allah, upon of whom be peace, said, "There is no negligence in sleeping, but the negligence lies in not praying a prayer until the time of the next prayer has come." [Related by Muslim.]​
Be careful of these salah times given above. Use SkyPrayers app on your phone to be accurate.
Important Islamic dates
_______________________________________________________________​​
​Taken from Prayer in Islam
​February 3, 2016  0
Facing the Qiblah
Direction of prayer is one of the conditions for the validity of prayer.
By: Editorial Staff
Facing the Qiblah (direction of prayer) is one of the conditions for the validity of prayer, and every Muslim should try and do his best to find out the direction of the qiblah when offering prayer either by using natural signs or a compass, or asking trustworthy people who exist in the place who know the direction of the qiblah.
Almighty Allah says:
So turn your face toward al-Masjid al-Haram. And wherever you [believers] are, turn your faces toward it [in prayer]. (Al-Baqarah 2:144)
Al-Bara` ibn `Azib (may Allah be pleased with him) said, “We offered prayer with the Messenger of Allah (peace be upon him) for about sixteen or seventeen months towards Jerusalem, after which time he turned towards the Ka`bah.” (Muslim)
When One Realizes that he was not Facing the Qiblah:If that deviation was so slight to the extent that does not invalidate the prayer, then his prayer is valid and does not have to perform it again. Abu Hurayrah ( may Allah be pleased with him) reported that the Prophet (peace be upon him) said, “ The Qiblah is between the east and the west.” (At-Tirmidhi)
Sheikh Ibn `Uthaymin (may Allah have mercy upon him) said, “The matter is broad in scope, so if someone offered prayer slightly away from the qiblah, that does not matter, as he is facing the general direction.” (Ash-Sharh Al-Mumti`)
If that deviation was great to the extent that the direction of the qiblah is behind him or on his left or right then: There are two cases in which the worshiper does not have to face the Qiblah: http://www.prayerinislam.com/fatwas-rulings/conditions-of-prayer-facing-the-qiblah/ 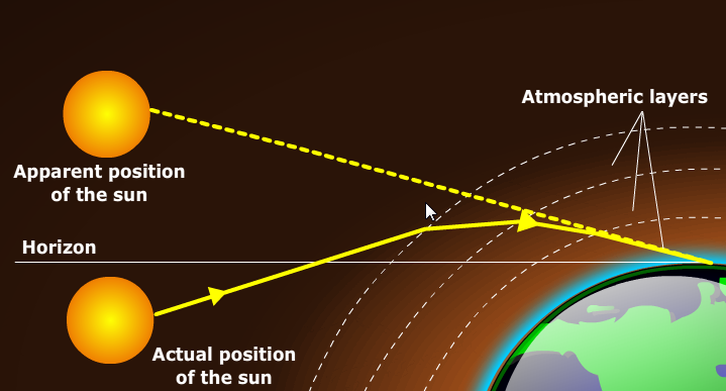 
​So how is this refraction of sunlight at sunset connected to our advanced sunrise and delayed sunset?

Imagine the journey of light rays from the sun. Their initial journey is through vacuum and then through the atmosphere of the earth and then it is finally seen by us. In this case, the vacuum will be a rare medium and the earth's atmosphere with all its temperature changes, winds, different gases will be a denser medium in comparison.

During sunrise, when the sun is just below the horizon, our atmosphere causes the light rays to bend and we see the sun early. Similarly, at sunset, the apparent position of the sun is visible to us and not the actual position due to the same bending of the light rays effect.

To sum up, due to the refraction, we see the sun rise about two minutes before it is actually there,  and during the sunset, we see it around two minutes more, although it is already moved from that position.

So you need to add three minutes to the sunset time shown in the newspapers or in the phone apps for the Maghrib salaat or for breaking of the fast.


​
​DONATIONS FOR ROHINGYA MUSLIMS
September 12, 2017
Masjid As-Saffat is collecting DONATIONS for Rohingya Muslim Refugees.
You can drop off your donations in the Masjid at the address below or come see the Masjid Management.
Jazāk Allāhu Khayran